A sermon from Exodus 14, which is the story of the Hebrews leaving slavery in Egypt, and crossing the Red Sea.

So, one of the things that the preacher is NOT supposed to do is assume that everyone in the audience knows their Bibles, or that they know the stories we’re preaching about.  We are not supposed “Oh, you all know the story.”

However, with today’s story, I’m going to assume that you know it.

The  Exodus is the story of the Hebrews who the Red Sea after leaving slavery in Egypt.   It’s the centre of the story of Moses, where Moses grew up a prince in Egypt, ran away, came back and told Pharaoh “Let my people go!”, Pharaoh said “no”, and then some plagues happened and eventually the Red Sea parted for the Hebrews and they crossed on dry land, while all of Pharaoh’s army the dead man’s float.

I’m going to assume we know the gist of this story because a lot of people have made a lot of movies about it.

If you are older, you will remember the greatest epic of all “The 10 Commandments” from 1956, featuring Charlton Hesston. 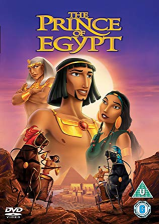 And then, twenty years ago “The Prince of Egypt” came out, and oh my goodness, this was one of the most star laden casts of the 90s!  I had no idea at the time, but this movie featured the voices of Val Kilmer, Ralph Fiennes, Michelle Pfeiffer, Sandra Bullock, Jeff Goldblum, Danny Glover, Patrick Stewart, Steve Martin AND Martin Short, with music by Mariah Carey, Whitney Houston AND Boyz II Men.    What was the budget for this movie?

Okay. So I hope we know the story!

The story of Exodus, of God hearing the cry of God’s people, liberating them from slavery, and then crossing the Red Sea on dry land, is THE story of the Old Testament.

This was the first Passover for the Jewish people, and is celebrated to this day.  There are even stories of Jewish folk in concentration camps still celebrating Passover, reclining together and re-telling the story of God’s liberation of their people.

This story is as story of God fulfilling God’s promise to Abraham, that Abraham’s descendants will number like the stars and they will make a great nation.

This story is a story of God hearing the cry of the oppressed and acting.

This is one of the stories that African American slaves latched on to in America, where they put their faith in a God that liberates people.

This story is a big deal.  If you watch sports, this is their TSN turning point.   It’s the climax of the spot.  To quote Rachel Held Evans, “Let my people go” has “shaped the faith of millions of people, inspiring artists and activists and world leaders for centuries.”

Okay, and now we’re going to look at this story in two different ways.

One of the ways will probably feel more natural to you, and the other one might feel a bit uncomfortable.   One more be more familiar, and one new.

And with Google, you definitely can find people supporting both ways to look at the story.

I’m going to let the cat out of the bag and let you know that we’re going to end up in the same place.  So, rather than look at the other side of the story with disdain or fear or animosity, try looking at it with curiosity, compassion, and understanding.    Someone needs to hear the story differently than you, and that’s okay.

Path #1 – This would be the way of looking at the story that’s portrayed in the first two movies, the 10 Commandments and the Prince of Egypt.  This is a story of Moses leading his people out of slavery, of challenging the empire, or God freeing one million Hebrews, of God delivering them to dry land.

God is good, and mighty to save.

This way of looking at the story is actually captured in a kids song, called Pharaoh Pharaoh.  I sang it when I was a kid at summer camp, and then when I was a counselor at camp we sang it, and then this summer we sent Arianna, my daughter, to her first time at summer camp, and during the parents program, guess what song they started singing?  Pharaoh Pharah! Ooooo Baby.  Let my people go, O-ah-ah, yeah yeah yeah.  All of us parents in back started laughing and said “They’re still singing this song?”

At the end of the song, though, there’s a line about all of Pharaoh’s army doing the dead man’s float.  And as I’ve gotten older, I’ve wondered about that.

Did those soldiers have kids?  Partners?  Surely they had parents who would rather not have to get into a boat to go pick up floating kids?

And those soldiers – Shoot… Surely they had hopes and dreams and might have trying to save enough money to buy their first house.  They were just doing what they were told by their commanding officer, and we celebrate their death as God’s victory?   And then we make a kids song of it?  With actions? That’s kind of dark, isn’t it?

Let alone that the Hebrews are only free from Pharaoh because God came and killed all the first born Egyptians.  I know that the Egyptians weren’t very kind and loving, but isn’t God supposed not to return tit for tat?  This has never sat well with me.  Maybe because I’m a first born, and if my parents were Egyptian, I’d be dead.  Or, now I think about my daughter.  Or let’s try this.  How many of us are the first born in our family.

Do liberation and freedom come at the expense of our enemies dying?  In this story… yes.  Pharaoh wasn’t going to let them go until he suffered enough consequences.

But do these questions take away from the liberation of God’s people?  I mean, like, they were in slavery for over 400 years.  That’s kind of a long time isn’t it?  What do we do with this?

Path #2 – This one is fairly new to me, but when I heard it, I was grateful.  I first heard it by reading some Jewish authors on their understandings of the Torah, and I’ve also heard this recently Christian scholars.

They suggest that the Exodus might not have happened exactly as recorded in the Bible.  Something happened, that’s not up for debate.  But what exactly happened, is.

We know quite a bit about Ancient Egypt, as they built pyramids and we’ve opened up their tombs and studied their mummies and read their hieroglyphic mission statements on their walls.  And what we’ve found out is that there is no recorded history of the Hebrew slaves leaving Egypt.  The assumption here is that if one million slaves walked out of Egypt, someone in Egypt would have written it down.  They didn’t.  The assumption is that if every firstborn died, somebody would have written it down.  But they didn’t.

It maybe not happening as recorded certainly gets us around the whole “God killing all the first born children” bit.  And the soldiers doing the dead man’s float.  I certainly don’t love worshiping a God who’s down with violence.

But it can also leave in an uncertain position.  Because what are we supposed to do with this story, and it’s place in Jewish religion?  And what do we do with many of these stories?  And what do we do with the fact that Jesus, Paul, Mary, Isaiah, Elijah, Esther, and Peter, were all Jewish and believed this story was an integral part of their religion?

Is just a fairy tale?

When I was in Albuquerque with Richard Rohr, he explored the question of why African American slaves adopted the religion of their oppressors.  That makes no sense.  Why would you worship the God of the people who owned you?

American slaves did not adopt the Christianity because it’s like Shrek or Star Wars.

Sure, Harry Potter is great, but I’m not so sure it can lead people out of slavery.

This story was written to show that in a world of localized religions, where the gods of one nation didn’t have power in another, or… there was actually a universal God who’s jurisdiction is the entire earth.

This story was written as a replay of the creation story, where on day 3, the water of chaos is separated to reveal dry land.

This story was written so that the Israelites would never forget that God has laid a claim on them, and they were to serve that God.  Not Pharaoh.  Not slave masters.  Not kings.  Not foreign armies.

But God and God alone, because God is in the business of giving God’s people freedom.

Freedom.  That is the invitation today for World Communion Sunday.  Freedom.

Freedom to claim God’s power in our world and in our lives.

Freedom to live in God’s claim on us.

Freedom to participate to in God’s way of life, where good news is proclaimed to the poor, freedom for the prisoners, recovery of sight for the blind… where the oppressed are set free.

Freedom to see the image of God in everyone, and live like it.

“Because if we can’t see Christ in others then we are no longer looking with the eyes of Christ.”  – Richard Rohr

And there is freedom to be found when we can see the Christ in others.

This is one of those times where I think that coming to have communion on Sunday morning is  quite counter-cultural and revolutionary, because today we’re not only going to look for the image of God in each other, but we’re also going to practice it.  We’re going to practice living into God’s way.

Who’s invited to communion?  Everyone.  As good ole wise Richard Rohr says, “Communion is meal for the sick, not a prize for being perfect.”  There is no meritocracy in Christianity.  Nobody is keeping score.

So we are all invited.  Friends, lovers, enemies, and fr-enemies.  Come.

Married or single, divorced or common-law or widowed.  Come

Straight or Gay or Bisexual. Come.

Those us who have lots of money and those of us who don’t have a lot of money.  Come.

Young and old or somewhere in between.  Come.

Mennonite or Catholic or Evangelical or Ukrainian Orthodox or Spiritual but not religious.  Come.

Women and men and gender non-confirming or those transitioning.  Come.

Those of us who are differently abled.  Come.

Pacifist or not, veteran or conscientious objector. Come.

Theologically liberal or theologically conservative or if you just don’t about any of that stuff. Come.

There is space for everyone at God’s table.

And when we serve each other, we begin to see the Christ in each other.

We come and serve each other as people who bear the image of God.

When we serve each other, we are learning to see with the eyes of Christ.